A few kilometers east of Sète along the coastal road is the impressive and original city of LGM. To cut a long story short La Grande Motte is a city built out of a swamp. From afar and from the water you will see unusually shaped white concrete buildings emerging from the sand but make no mistake LGM is one of the greenest resorts you will ever see.

In the late sixties when the all-inclusive package holiday trend was taking off, so were the French….to Spain. Under the watchful eye of Charles de Gaulle, the architect Jean Balladur designed this holiday destination for the nation. The idea was to keep French holiday makers in France, attract northern European vacationers en route to Spain, and also to make the beach accessible to people of socio economic diversity.  It was part of la Mission Racine; to clean up and develop the Languedoc coast for tourism. A visionary, Balladur imagined a ‘station balnéaire’, or seaside resort for the masses that left nobody indifferent.

In 1967 when La Grande Motte was inaugurated I was still in nappies in Vancouver. This may be why I had no preconceived notions about LGM and have only ever seen it for what it is…..an architecturally inspired, ecologically aware playground by the sea. The architect was inspired by the pyramids of Teotihuacan in Mexico, by the Brazilian architect Oscar Niemeyer and also by Le Corbusier who conceptualized the modern city of Chandigarh in India. Originally a student of literature who studied under and collaborated with Sartre, Jean Balladur became an architect after WWII. He thought he would be more useful to France as an architect.

It was quite an undertaking to dig out the swamp and rid the area of mosquitos. He worked closely with the landscaper Pierre Pillet to create a garden oasis by the sea. The orientation, placement and size of the pyramid like structures were designed to protect the coastal plant life being battered by the elements. The walkways which link different parts of the city are lined with Mediterranean plants giving much welcomed shade. It’s an ideal place to cycle around; it is completely flat and renting bikes is easy.

Another fine idea he had was to keep the access roads and parking away from the seafront. It makes a nice change to gaze out at the sea and not have to blank out a giant carpark. The city of La Grande Motte was recognized by UNESCO as a world heritage site in 2010. 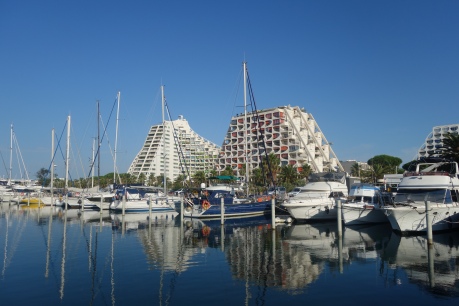 There are 7km of fine sand beaches.  There is no natural shade; you need to bring your own. The water depth is very progressive which is perfect for families with young children. A long walk out to sea, it’s a long way to strut your stuff or a heck of a long walk of shame. The Plage du Grand Travers is the wildest beach in LGM. Plage du Couchant is good for families and watersports, but there are spots up the coast better suited to kite surfing if you are already adept.  You can kayak, stand up paddle, try parachute ascensionnel, or jet ski.  Point Zéro is a lovely beach not too far from the action.

The Plage du Centre Ville is lined with restaurants, bars, cafés and ice cream vendors and you can also book catamaran excursions at the marina.

Between the 14 July and the end of august, LGM is very busy. This is pretty much true for all beaches in France. The city goes from under 10,000 inhabitants in winter to well over 100,000 during the summer season.  It is up to you when you visit but as the weather is so accommodating from May to the end of October you could avoid these six weeks if you are shy of crowds.  There are also advantages to braving the full on high season such as the regularity of certain excursions. 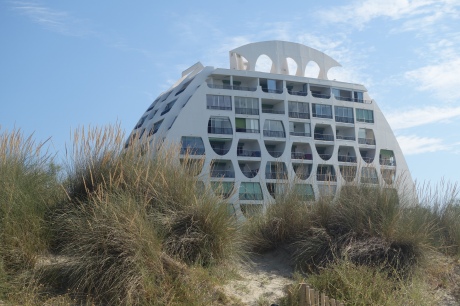 LGM has a fantastic tennis club.  It is undoubtedly my favorite place to play.  If your idea of heaven is to play tennis outside in the summer with a bright blue sky overhead surrounded by Mediterranean plants with a slight sea breeze and the sound of cicadas singing, this is the place for you.  There are 31 courts, a few clay, most hard and only a few covered, to give you an indication of the climate.  The amazing thing is that you don’t need to belong to this club to play here. Just book a court and pay 13 euros, vive la France!

There is a thalassotherapy center here open throughout the year.

Over towards the golf du Ponant things are a little quieter.  You can waterski, learn to sail, stand up paddle etc. on the étang (lagoon) and there is also a Golf Course, designed by Robert Trent Jones. 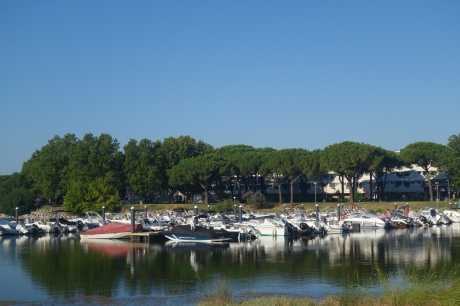 Whatever your budget or sport there is something for you here at LGM. There is a harmonious vibe here, despite the size of the city. There are too many hotels and restaurants to name. The marina is the liveliest place to stay and the golf du Ponant is the quietest. It has a kind of timeless neighborhood feel to it with a good pizzeria and a couple of other restaurants.  There is also a beach club called the Belambra by the Lagoon (étang du Ponant).  You can also choose from hundreds of apartments to rent alongside the beaches of La Grande Motte.

Open all year Wednesday mornings from 8:00 to 13:00 by the étang du Ponant

Bonnes vacances à la Grande Motte!  You can follow my blog and keep up with me on my travels around beautiful Occitanie. Next stop Bagnères de Luchon for le Tour de France!