Bagnères de Luchon, or Luchon for short, is where I go when I am feeling homesick for Canada.  One hour and forty minutes from Toulouse this little city in the central Pyrenees is a ‘station de ski’ as well as a ‘station thermale’. Actually it is more accurately a city in the mountains which happens to have a ski resort and thermal baths. How can a city that has existed for more than 2000 years in the south of France near the Spanish border, far from the sea remind me of Vancouver?  Because here in Luchon, the ‘Queen of the Pyrenees’, trees line the main avenue that runs through the centre of town, the sidewalks are wide and everyone is busy practicing their favorite sport. The Port de Venasque is majestic and imposing at the far end of les allées d’Etigny, the Champs Elysees of the Pyrenees.

Depending on the season, visitors can go paragliding, skiing, snowshoeing, or head out on road bikes, VTT, or Arapaho (Spanish mountain bikes without pedals….I know!) Luchon is a year round resort and every season has its’ allure. Hiking, canyoning, rafting and especially cycling are the favorites in July and August.

The autumn here is beautiful; the pace slows down as the leaves change colour. The weather is fantastic in September, October and sometimes long into November. It is the best time for hiking and here there are no dangerous animals.  Officially there are a handful of bears imported from Eastern Europe but you won’t see any.  I did see a couple of marmots early one morning near lac d’Espingo after a night ‘on bivouac’.  You are allowed to set up your camp at nightfall as long as you are gone in the morning. I will be back here and blogging in the fall as well as the winter when snow sports take over as the main activity and Superbagnères is opened.  The ski season is usually from just before Christmas until the middle of April. The thermal baths are open throughout the year; the perfect place to visit after a long day hiking or skiing. I will tell you all about them on my next visit.

Right now in summer Luchon is all about the bicycle. 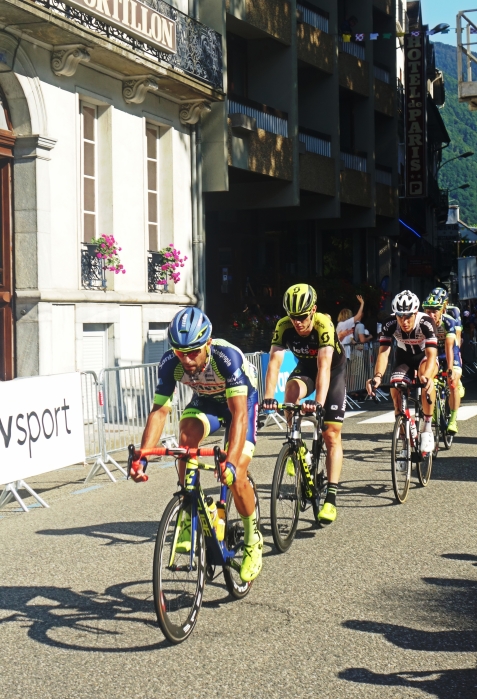 The Tour de France has been around since 1903 when the editor of a struggling newspaper and former champion cyclist thought up a publicity stunt to sell more newspapers.  The first Tour de France had the cyclists riding over unpaved roads sometimes through the night with no helmets.  It has become  a three week yearly event that is as much about endurance as it ever was.  The roads are paved now and since 2003 helmets are obligatory but the’ Tour’ still seems to get harder and harder each year and many of the riders give up the race long before the arrival at the finish line on the Champs Elysees. Watching the ‘Tour’ on television is a fantastic way to see France before a visit in person.

During the summer, when the Tour de France passes through town, Luchon often plays host as an arrival and departure city. On Tuesday 24th July 2018, the l6th stage started in Carcassonne and finished in Luchon. The fourth most watched sporting event in the world and the only free one, the Tour de France has a long history here.  Luchon first received ‘the Tour’ in 1910 when Octave Lapize won the stage. This year Julian Alaphilippe of Quick Step beat Adam Yates of Team Sky who fell but wasn’t badly injured during the decent of the Col du Portillon. Rather than follow this stage from Carcassonne to Luchon we decided to do it the other way. We watched the arrival of the’ Tour’ here in Luchon and then headed over to the Festival de la Cité in Carcassonne to see a concert the following evening.  It is a fine idea to go against the traffic associated with the Tour de France unless you are a cyclist yourself, or a major’ Tour’ fan.  If you are fit enough, crazy enough, to brave the mountain stages in the heat of summer you can go ahead of the’ tour’, watch from the summit and then cycle down after the riders finish.  Lots of people camp out the night before to cheer on their team from camping cars too.

The tour finished as always in Paris.

Another summer event here is the festival of flowers, held in August.

If you are a tennis player there is a great little tennis club in Luchon by the river with a view of the Port de Venasque. No need to be a member; you can book hard courts for 8 euros and clay for 10. You can take lessons with André or even book a ‘stage’, or tennis clinic.

There are many places to stay in Luchon; hotels, chambres d’hôtes (b&bs), and camping of all comfort levels.

In town I like the le Castel d’Alti, next door to the Hôtel Alti Luchon for the  style and location with parking and an great pool. They have a nice happy hour in the courtyard with music and coctkails.  visit http://www.lecasteldalti.com .

There is a large public outdoor pool with a nice tidy lawn open in the July and August.

If you want to stay out of town Le Sapin Fleuri in Bourg d’Oueil, a pretty village overlooking Luchon, has rooms from 72 euros.

Some of the camping lodgings have swimming pools too  like the Campsite “Domaine Vanilla Flavour” tel: 0561898490

There are quite a few restaurants in town on the main avenue, les allées d’Etigny.  I like the Caprices d’Etigny for the bio trout and grillades au feu de bois. It is worth driving to Spain, either by the col du Portillon when the weather is good or via St. Béat when it is closed to visit the Catalan town of Bossost. Er Occitan and El Portalet both fabulous, (€€€)

If you don’t mind driving, there are a few restaurants up the mountain like the Ferme Auberge Chez Justau, where the owner will serve produce from her farm. Reservations: 05 61 79 00 97

Bonnes vacances in Luchon! Please follow my blog and keep up with me on my travels around beautiful Occitanie.