Wahoo! The kids are back at school.  As far as I remember the end of the summer holidays seemed to coincide with the end of summer in Vancouver. There were still some beautiful days, when I would gaze out the window wishing I were anywhere but cooped up in a classroom with oppressive fluorescent lighting, but the really hot days were behind us.  Autumn comes early in Canada, and it is spectacular.

Near Montpellier, around the Golf of Lion, September is still pretty hot and it’s safe to go back to the beach. The crowds have thinned out and the prices are dropping. The water is starting to cool down just a little bit. The mornings are fresher but there is still plenty of sunshine during the day.  Weekends are busy but during the week there are great deals to be had.

Palavas is a little resort just south of Montpellier. The oldest traces of the city go back to the end of the first millennium, around 990. It was a fishermen’s village long before it became a resort so there is more than a touch of authenticity in this regard. It is pretty busy being so close to Montpellier but as the first resort in the area it still has an old city feel to it. Located only 9 kilometers from Montpellier airport between a wild pond and the sea, the town is divided by a little canal, actually the river Lez flowing into the sea.

Being so close to the city of Montpellier it is popular rather than exclusive but that doesn’t take away its charm. If anything the opposite is true, apart from during August when it really is extremely busy! You can be there in minutes, coming from Montpellier or stop off easily on your way up or down the A9 autoroute from Paris. Getting to Palavas from Montpellier on public transport is the easiest thing in the world. You take the number 4B tram destination Garcia Lorca to the last stop….you couldn’t mess it up if you tried. From there you walk 1 minute to the mediathèque and take the 131 bus to Palavas. They are different transport authorities so you need one tram ticket and then you buy your bus ticket onboard. In July and August you can also get there by the number 3 tram + bike (which is free), see the Tourism Office for that option.

There is nowhere to park a car for free in Palavas anymore and the ticket price for a parking infraction is a whopping 35 euros. Parking meters are everywhere and it’s free to park overnight and at lunchtime, from 12h until 14h.

The city of Palavas lies on the Languedoc coast, where the weather is warm long after the summer holiday season ends. The months of September and October are lovely.  On the left bank is where you will find the tourist office and convention centre in an old reconverted water tower where there’s a panoramic restaurant on the top floor.  There are quite a few restaurants located in the old town. There is a pleasure park and an arena where they hold concerts and plays during July and August. There is a good municipal tennis club fairly well hidden behind the arena. Tel: 04 67 42 22 95

Albert Dubout was originally from Marseille but he studied in Montpellier and then spent much of his later life here. There is a museum in Palavas dedicated to his works.  A humourist and an illustrator, he is best known for his black and white cat drawings and for depicting the quintessential holiday maker of a bygone era. The museum is housed in the Redoute de Ballestras. I had seen it many times from the road and wondered what it was. So out of context in the middle of a swamp, I thought it might be a giant bouncy castle. 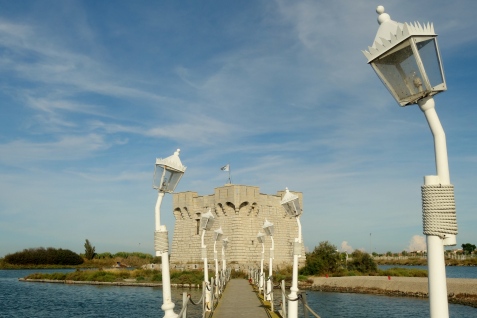 It is actually the original watch tower that permitted the installation of a fishing village, les Cabanes de Ballestras, which became modern day Palavas. Constructed between 1743 and 1746, the redoute functioned as a watch tower until half way through the next century.  In 1906 they turned it into a water tower. As the population and  need for water grew, they built a concrete water tower around the redoute, where the Tourism Office and panoramic restaurant are now. They then deconstructed stone by stone the old watch tower and reconstructed it for the museum.

Cathédrale de Maguelone is a Roman Catholic Church and former cathedral that stands on an isthmus between the Etang d’Arnel and the Mediterranean Sea only four kilometres from Palavas.  It is located in an area of protected coastline with a variety of birds, in the middle of the island, surrounded by vines. It was the seat of the diocese for a thousand years from the VI to the XVI century. It eventually lost its Episcopal throne to Montpellier in 1536. There is a Festival des Voix de Maguelone in the autumn, mostly chant choral. It is free to visit and definitely worth the effort.

Palavas is all about maritme traditions. There is medieval jousting (see the post Sète) which is fun to watch on the main canal. For a few years now the Palavas beaches have been awarded the Pavillon Bleu, an ecolabel that has major tourist connotations,  and is a symbol of exemplary environmental quality. The soft sand, turned golden by the days of endless sunshine are groomed every morning and there are recycling bins discretely placed deep in the sand to help keep the beaches tidy for everyone.

You can do all the regular sports here like  diving, paddle, sailing, flyboard, parasailing, beach volley, yoga and more. Being so flat, it is also a pretty nice spot to run or cycle along the coast or out to see the flamingos.

Which beach to visit?  Well that depends on what you want from a beach.  If you like a more secluded beach, go out to Maguelone and visit the cathedral and then the beach nearby.  Parking is four euros, from there you can take the little train which is free all the way to the church.  It runs until the 17th September after which time you can  walk or cycle there for free.  There is a little restaurant where you can have lunch overlooking the vineyards in the summer. Comptoir des Compagnons is open all year long, 7 days a week; Terrasse Fabrège is open in the summer 04.67.50.49.88, 12h to 15h.  There is a clothing optional beach somewhere around here, I didn’t see it this time but I wasn’t looking for it either.

The centre beaches are obviously the busiest but if you walk or cycle in either direction you will find peace and quiet.

Where to stay: Les Coquilles is a small stylish comfortable hotel with lovely functional rooms and a great wine cellar where you can have a glass of wine outside.

The owners and their employees are friendly, discreet and accommodating.

I also like The Hotel Brasilia, another small hotel in a great location on the other side of

LCV has an all  equipped apartment for rent in Palavas.

Enjoy Palavas-lses-flots! Thanks for reading. Follow my blog to keep up with me on my travels around beautiful Occitanie….