If you venture just outside of the historical centre of Toulouse and cross the river you will see an interesting and varied neighbourhood with an incredible history.

Saint Cyprien, now a lively multicultural area located on the left bank of the river Garonne, was at one time occupied mainly by fishermen. With the construction of a hospital, the former Saint Marie de la Daurade around 1130 and then the bridge de la Daurade about fifty years later, the neighbourhood  became an important passageway between Toulouse and Gascony on the Camino de Santiago, the network of pilgrims ways leading to the shrine of the apostle Saint James the Great.

During the periods in which the plagues ravaged Toulouse, the Hospital de la Grave was used to house those afflicted with the disease, isolating them from the beggars, the injured and the disabled.  The hospital was enlarged to cope with the mounting epidemic and underwent a name change, taking the name Saint Sebastien in order to invoke his help in 1508-1514.

In 1628 the Plague recurred in the city, worse than ever before. The situation deteriorated and eventually in July the next year every plague sufferer in the hospital, as well as the beggars, cripples, incurables, alienated, prostitutes and abandoned children who had been given shelter died. In 1647 the hospital was renamed Saint-Joseph de la Grave. Since the late 1980’s it no longer operates as a hospital.

There is a museum dedicated to the history of medicine in Toulouse open thursdays and fridays.

I was able to visit la Grave, which was open to the public last weekend, for the Journées et Soirées Européennes du Patrimoine, a day where citizens can visit historical buildings normally closed to the public.

Amazing and such a beautiful sunset!

Toulouse, along with Montpellier, has a long and important history in the world of medicine. During the 18th century some important doctors settled in the city. Psychiatrist Philippe Pinel insisted that “madmen” should no longer be shackled in chains. This was a revolution in the mentality of the time. Around the same time a local psychiatrist Jean-Etienne Esquirol fought to put an end to the arbitrary internment of people suffering from mental problems. Between 1880 and 1914 the number of doctors doubled in Toulouse and the city remains a pioneer in the advancement of medical practices. In Toulouse in 1968 Louis Lareng, a physician and politician, created the emergency medical aid service SAMU.

A little farther south is the Oncopole, a regional anticancer centre. Built on the site of the former AZF, a chemical plant where an explosion in 2001 left 31 dead and 2500 injured, the 220 hectare campus is a symbol of the city’s resilience. Medical professionals, public and private researchers and academics work together in the fight against cancer. Without depriving oncology of means or resources the city invests in biotechnology, medical equipment and the silver economy.

Which reminds me there is a great hair salon in Saint Cyprien called Paula Coiffure where you can get your roots done or your hair styled ‘in english’ located at 49 Grande Rue Saint Nicolas.

Place Olivier is named after a local benefactor who donated the fountain in part to commemorate the great flood of 1875. The chocolatier wanted to commemorate the victims and thank the people who came to their aid. Olivier has been around since 1780 making chocolates in Toulouse.

Nearby Place de l’Estrapade (strappado) takes its name from an ancient form of torture. The victims were secured to a rope and made to fall from a great height almost to the ground before being stopped with an abrupt jerk. Something like forced bungee jumping with a rigid cord!

These days it is a nice place to have a drink or a bite to eat.

Le Temps des Vendanges is a nice little wine bar in the square.

Just behind the square is the the church of Saint Nicholas, protector of flood victims, who dethroned Saint Cyprien after a devastating flood in 1177.

The Château d’Eau is considered a model of ingenuity and good taste. The accomplishment of French industry changed the life of the inhabitants. The water of the Garonne, purified by filters installed in a meadow, now known as the prairie des filtres was propelled to the top of the tower by  pumps. After passing through the flow regulation on the third floor, the water went back down and fuelled 90 fountains. Four thousand cubic metres of water were regularly distributed to the people of Toulouse. Around 1870, the Château d’Eau was abandoned due to insufficient capacity. 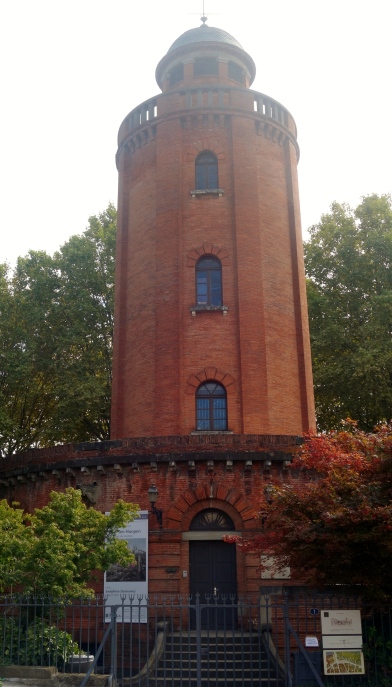 In 1826 the city decided to regroup the different animal slaughter houses in order to improve hygiene conditions and better control the sale of meat. Closed in 1988 the group of buildings was once again rehabilitated to house the centre of modern and contemporary art: Musée Les Abattoirs, opened in 2000.

Enjoy your visit to the neighbourhood of St Cyprien Toulouse, the capital of Occitanie. Follow my journal and my travels around beautiful Occitanie.

Hi, I am so happy that you found me and my blog. My Beautiful Occitanie is all about the wonderful region of SW France that is Occitanie. Have a look and join me on my travels and plan a visit of your own..... View all posts by CK Grasset

6 thoughts on “South west side story”