Were you there?  The people of Toulouse and their suburban neighbours and others from far and wide came to watch the most spectacular street art imaginable.

The Guardian of the Temple – An Urban Street Opera

I wanted to share this with you so that you could get the full experience.  Don’t you love that people have worked so hard and invested so much time in something entertaining, beautiful and artistic? Sometimes it seems like so much money is invested in conflict instead! There are other areas that need money invested but what is life without art?

On this long weekend of the Toussaint there was a street performance like no other, an opera of giant proportions in four acts.

La Machine is a street theatre company, a collaboration of artists, technicians and decorators, directed by Francois Delarozière. 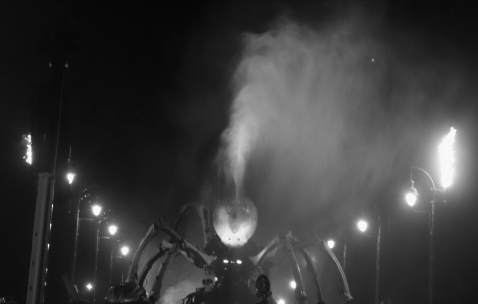 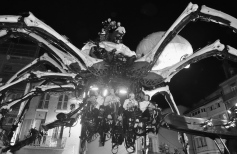 Ariane the spider; the night show.

There was quite a buzz leading up to the weekend but at the same time the creators and the media managed to keep some of the element of surprise and enrapture the spectators whole heartedly. I would have been disappointed to have missed this performance. Luckily, my curiosity brought me back early from the mountains and I was there to witness this curious event.

The 14 metre high Minotaur, mythic Greek monster with the head of a bull and the body of a man, is made from steel, wood and leather. The ‘monster’ has wings and long eyelashes which helped to excite rather than frighten the little ones even if he did breathe fire and water.

Ariane a giant spider was as impressive, even to someone with arachnophobia like me!

Together the two magnificent creations reinterpreted the myth of Ariane. This epic story was told over four days in the form of live theatre in the streets of Toulouse. The first days saw the creatures arrive in the city.  The locals woke up to find Ariane the huge spider on the Hotel Dieu, a landmark building in the heart of Toulouse! 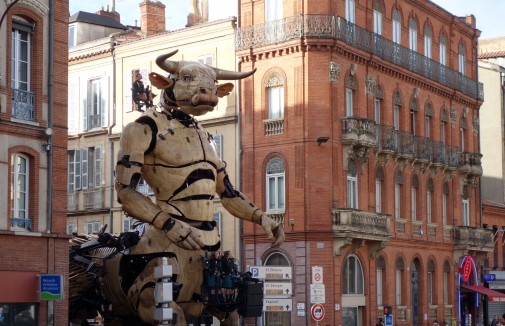 After the appearances of the two giants, they met up in front of the amazed crowds who came to see them and run around the back streets hoping for a close up of the beautiful creatures.  At twelve and fourteen metres high, they were hard to miss. 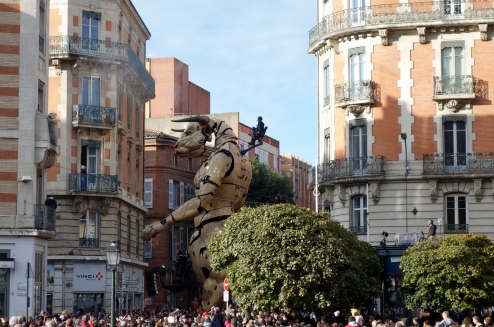 The Temple of the Guardian story was created after an excavation in 1993 around place Esquirol for the metro revealed the foundations of the antique temple Capitole de Toulouse.

The archeologists made an important discovery: some Etruscan inscriptions, engraved on stone in the foundations.  After twenty five years of research to discover the significance, it was found to be an oracle delivered by an eminent Etruscan sibyl.

“Toulouse marked by gold, fire, blood and water, will see its temple disappear. His guardian buried underground will remain. When the day will rise on the temple, finally discovered, fifty equinoxes will be needed to bring him back to life. Protector of the city, he will be reborn by the waters of the river at the favor of the new blue moon. Wandering around, looking for the temple and lost in the labyrinth, only Ariane, transformed, can guide him to his new home.”

“The Minotaur is not what we believe him to be.  His dwelling is a labyrinth that lies under the sea and the oceans. He travels the world taking the corridors that connect the continents.  In his solitary games, like fleeing a bad dream, Astérion decides to go out in the street. In the morning, asleep in the centre of the pink city, the son of Pasiphaé is ready to lose himself in Toulouse, the labyrinth city. The giant spider, daughter of Minos and Pasiphaé is the guardian of the labyrinth.  She has been watching over Astérion since his birth; she goes out as well. Protector herself, she uses her magic powers to guide her half-brother to his future home in order for him to regain his calm and tranquility.” 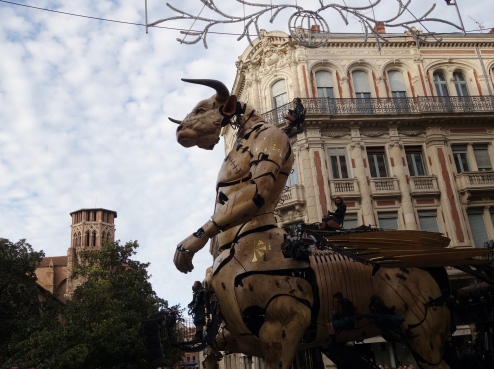 It all culminated with the Minotaur Astérion and the giant spider meeting up again on the Pont Neuf and Ariane guiding him to his temple. With blood red smoke billowing out around the two mastodons, water spurting out from the bridge and the voices of a female choir resonating with a symphony of violins. The crowd was impressed with the final act of this superbly imagined show of incredible magnitude. 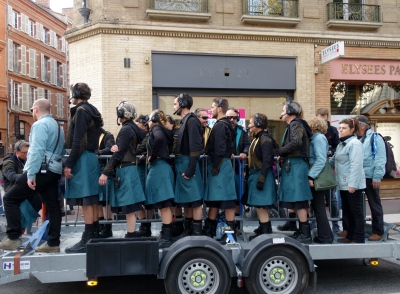 The Minotaur was created especially for the city; the ‘Guardian of Toulouse’ was a natural choice for the theatre company. The protector of the city symbolizes the city’s attachment to its history and its passion for art and technology.

Twenty five years after the discovery at Esquirol we were fortunate enough to witness this extraordinarily beautiful story live in the streets of Toulouse.

Merci, thank you La Machine to whom I am grateful and in awe for having created something so wonderful and spectacular that must have been incredibly difficult to pull off in terms of imagination and ‘mise en scène’; and kudos to the city of Toulouse for encouraging, supporting and providing security for the ‘greatest street show on earth’!

You brought people of all ages together in the streets with your monsters and music and somehow ignited curiosity and admiration in all. It was like being on a film set and at an art exhibition and an opera all at once.

I was thinking that next weekend would be boring without our monsters to chase through the city but then I remembered….

The Minotaur Astérion and the giant spider Ariane will be amongst many others relocating to Montaudran, a suburb of Toulouse, for the opening next weekend of the Halle de la Machine.  Many monsters and machines will be on display at their new home. On the historic runway where Aéropostale* once operated, the runway of the giants or la ‘Piste des Géants’ will be inaugurated next weekend. Welcome to the Machine!

*Aéropostale was a company, founded by Pierre-Georges Latécoère, which operated from 1919 until 1933, founded in Toulouse. They were pioneers of aviation….Rendez-vous soon for a post about the story of aviation in Toulouse.

I hope you have enjoyed this post about le Gardien du Temple. If you were there I would love to hear from you.

Remember to click follow me to keep up with me on my travels around beautiful Occitanie…….…….à bientôt Christina.