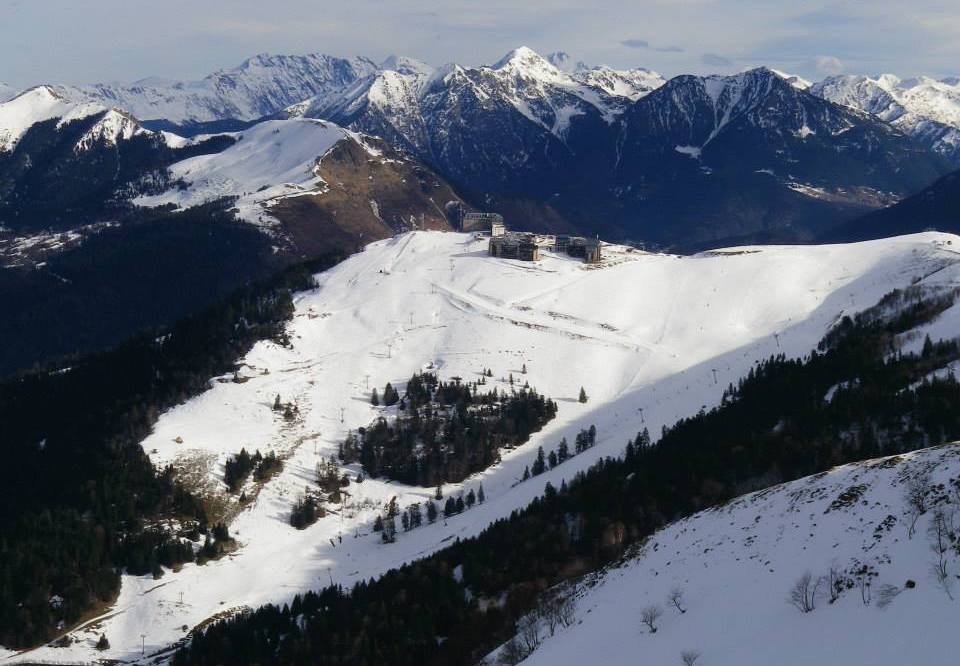 The ski station of Superbagnères overlooks the valley of Bagnères de Luchon, known simply as Luchon.

As I have mentioned in other posts the resort is attractive in all seasons but winter is simply the best!  I am suffering with the flu although, hallelujah, I think I am finally getting the better of it. I have been thoroughly miserable as I have not been able to ski yet this year.  I know I know first world problems but still…..snow has a tendency to melt very quickly in this sun drenched corner of South West France.

There is no time to hesitate or ponder do I have time to ski?  Can I afford to ski right now?  Just do it, while the trees are magical and white, and the powdery snow beneath your feet allows you this great pleasure.

Open since the beginning of the 20th century, the resort has long been popular with people from Toulouse, as well as our Catalan neighbours and other foreign visitors, notably the British.  The mountain resort is only one hour and forty minutes by road from Toulouse.

Ski season is pretty short here compared with Whistler in B.C. or anywhere in Western Canada but when the conditions are perfect, and sometimes they are, having this jewel for a backdrop is just splendid!

For many years the Grand Hotel de Superbagnères, in a dominant position above the city, was the only place to see and be seen. The construction was finished in 1922, and a direct stop on the funicular railway was added for patrons of the hotel.

In the winter of 1954 there was an unfortunate accident which killed 6 people.  Five people, including the two drivers, were killed in the crash. One young skier needed medical attention and was unable to get off the mountain while the train was inactive.  It was the only accident in 54 years.

The train was in service from 1912 until 1966. The hotel is still in its dominant position physically but the construction of a road in 1960 leading to the resort, and a gondola in 1993 which connects the slopes to town in eight minutes, has made its position less enviable for visitors who want to frequent the restaurants and bars in the city for their ‘après ski’ fun.

If skiing really isn’t your bag, you can also jump off Superbagnères, a great spot for parapente!

Superbagnères is a laid back resort with something for everyone.  This mountain is right above the city of Luchon, population about 2300, so there are talented little skiers navigating the ski runs.  Don’t be put off by the tiny racers zooming past you or underneath you on the chairlift. The competition groups with their slalom courses, moving from slope to slope can be intimidating but when you grow up with the station in your backyard you get very good, very young. Funny thing, I have been skiing since the age of five and I have definitely peaked.  I love it as much as ever but I ski like I really don’t want to fall, and I wear a helmet.  There are some surprisingly difficult blacks at this little station. There are also lots of people learning, adults and children.

After a few hours I am often ready to ski down the Hount-Estrete run which takes you straight to the Hount restaurant, the perfect break!

There are also two or three restaurants near the arrival of the gondola and many little spots to stop and picnic at your leisure, needless to say taking everything you bring on the mountain back with you!

The colour coding is not exactly the same as in North America, but to tell you the truth I can’t remember exactly how they differ. This reminds me of the two years when I tried snowboarding as an alternative to skiing.  My ‘teacher,’ it turned out, was colour blind and I had an interesting day learning to snowboard on black runs in an icy St Anton.  Fun times! I am very happy back on skis. Hey, at least I gave it a shot!

As a heads up, the school holiday season in France is divided into three groups, AB and C. Toulouse is part of the group C which is from 24 February until the 10 March in 2019. That makes it the busiest time to come to ski at Superbagnères.

There are thermal baths in Luchon which are worth a visit too; you can read about them here.

If you purchase your lift ticket at the tourism office in Luchon or at the ski lift you can opt for a pass which grants you access to the ‘vaporarium’ (thermal baths) as well.  A day on the slopes followed by a spa visit is bliss and seriously reduces the aches and pains that follow your first ski of the year.

Visit www.luchon-superbagnères.com for up to date snow info.

The Festival of Film in Luchon is a yearly event since 1998 which is held at the beginning of February.  It celebrates telefilms and broadcasts from this beautiful location, from 06 February until the 10th February this year, (2019). There are many films to see, open to the public, during the entire weekend.  visit http://www.festivaldeluchon.tv

I hope you liked this post about Superbagnères.  Follow me to keep up with me on my travels around beautiful Occitanie.  Bonne glisse et à bientôt……….Christina

Hi, I am so happy that you found me and my blog. My Beautiful Occitanie is all about the wonderful region of SW France that is Occitanie. Have a look and join me on my travels and plan a visit of your own..... View all posts by CK Grasset