In the heart of the Camargue Gardoise is the medieval city called  Aigues-Mortes.

In an unusual and lovely area of Occitanie is the impressive walled city, rich in heritage and culture.

If you are travelling around the seemingly endless Languedoc coast and need a break from the beach this is the perfect place to stop.

My husband and I were on our way to Ardèche, another gorgeous part of France, to celebrate my father in law’s birthday. It was the ideal half-way stopping off point from Toulouse.

With spring around the corner, a desire rises in me to see the Mediterranean; the intense blue sea against the limpid sky incandescent under the winter sun. It is too soon to swim but not too soon to play tennis outdoors and walk along the waters’ edge dreaming about summer. 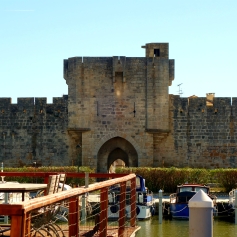 Aigues-Mortes gets its name from Aquae Mortuae; dead water.

There have been people in this area ‘since mankind has walked the earth’.

In the middle of the thirteenth century Louis IX acquired his spot here from the Benedictine’s and the town of Aigues-Mortes came into being with a defense system designed to repel all kinds of attacks.

You can take a tour of the ramparts which will give you a fantastic view of the surrounding area.

In order to attract people to come and live in this region, at that time deprived of all agricultural resources Louis IX exempted inhabitants from duties and taxes. People relocated from Catalonia, Provence and Italy.  It was thanks to these privileges that the town remained inhabited after the decline of the port.

Louis died from typhus in Tunis, on one of his crusades, and eventually became a saint.

There were plenty of conflicts over the years where soldiers used the ramparts to sound the alarm but eventually the fall of the port of Aigues-Mortes came about because of sandbags and clogging of the channels leading to the sea. This happened just as the superior port of Marseille became part of the kingdom of France.

During the religious wars numerous Protestants pillaged the town, looting burning and ransacking all the Catholic religious monuments. Protestant power came to an end in 1622 under the reign of Louis XIII.

The tower of Constance was used as a prison for eighty two years.

The upper room in the tower was reserved for men, originally assigned to prisoners of rank.  The lower, more hostile part of the tower was for women, (charming ) or both men and women when they ran out of room.

From 1708 until 1768 the Tower of Constance was a uniquely women’s prison, holding prisoners of all ages.

There are salt water lagoons surrounding the city, which are red because of the high concentration of salt in them. This is one of the places where la fleur du sel de Camargue, (great for cooking) comes from.

There are plenty of restaurants and bars within the city walls.  As it’s a touristy place, with good reason, you need to look around a bit and venture off the main square to find the more interesting restaurants and bars.   There are beautiful white semi wild Camargue horses roaming around the countryside.

You will undoubtedly see flamingoes in the air, or on the étangs (wild ponds), dotted about the area.

Wines from this region grow out of the sand.  You will see the vines alongside the roads.  They are the pale rosé wines known as le gris and le gris de gris.

It is the perfect summer wine and you will find it everywhere.

The area covers nearly 3000 hectares.  There are around 110 wine grower/ producers.

Personally, I love gris de gris but alas, wine is such a personal experience. You should at least try it, extra chilled while you are in the area. 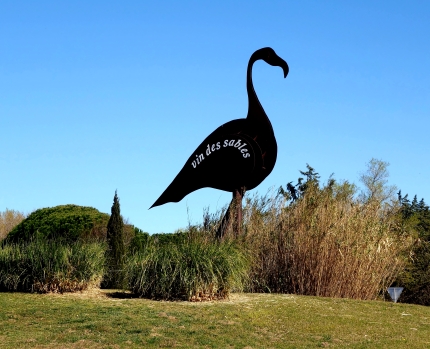 I hope that you have enjoyed this post about Aigues-Mortes.

Follow me to keep up with me on my travels around Occitanie.